END_OF_DOCUMENT_TOKEN_TO_BE_REPLACED

Sip in Style with Silver Drinkware this St. Patty’s Day

With St. Patrick’s Day right around the corner, you better be upgrading your drinkware collection to match the spirit. With thousands crawling the bars to celebrate the Irish festival with a bang, you better deliver in style. Yes, decorating items, green party accessories are huge, but upgrading your St. Patty’s Day bar with silver drinkware will take you even to the next level.

END_OF_DOCUMENT_TOKEN_TO_BE_REPLACED

Best & Most Refreshing Cocktails for Summer 2019

Summer means it is time for some relaxing vibes, fun in the sand, and drinks to quench that thirst while under the heat of the summer sun. Aside from sipping coconuts with those cute umbrellas, the summer cocktail scene is the most colorful and refreshing.

This year, what drinks will be making waves as the weather continues to heat up? Here’s a low down on the top predictions for the cocktails that you’ll surely want to serve at your backyard barbecue this season: END_OF_DOCUMENT_TOKEN_TO_BE_REPLACED

On the first Saturday in May, Louisville is besieged with visitors that have come to witness the most prestigious thoroughbred horse race in America. From a birds-eye view, Churchill Downs Race Track becomes a moving flotilla of expressive hats showing a flash of silver cups.

Surrounding a dirt race track are stands full of race enthusiasts, socializing as they wait to see who is going to become the winner of the first leg of the Triple Crown trifecta.

This “Run for the Roses” race is full of traditions that date back to 1875. It has run every year since. Three-year-old papered thoroughbreds gather to race a mile and a quarter for the most exciting two minutes in American sports.

Crowds fill the infield singing “My Old Kentucky Home” by Stephen Foster during the post parade, then toast the winner with the traditional Mint Julep libation. The late afternoon sun sparkles on the specially designed silver Mint Julep cups as race traditions are upheld.

END_OF_DOCUMENT_TOKEN_TO_BE_REPLACED

The Mint Julep:  Born In The South, Thriving At The Derby

Since 1938, the mint julep has been the official drink of the Kentucky Derby, and it’s hard to imagine a cocktail more

quintessentially Southern. A combination of sugar, bourbon, crushed ice and mint, this refreshing drink conjures up images of a bygone genteel era. There are over 120,000 of these drinks served at the race each year, and even people at home get in the spirit of the event by mixing their own.

What you may not know, however, is that the history of the mint julep stretches far beyond the Derby, and the drink we all know and love has changed quite a lot over the years.

Early History of the Mint Julep

The mint julep has a history steeped in legend, with multiple origin stories told and believed throughout the region. Some fanciful tales suggest that the drink was developed when a Kentuckian, boating across the Mississippi, plucked fresh mint leaves growing wild on the banks and topped his bourbon with them.
END_OF_DOCUMENT_TOKEN_TO_BE_REPLACED

Copperware is a commonly found in the home – cups, bowls, decorations, etc. It has increased in popularity over the years. Any one of these copper items makes a great personalized gift when engraved. Make this special occasion one to remember with an engraved copper mug!

There are few drinks that have inspired their own vessel and become such an icon as the mint julep cup. Beginning in the late 1930’s, the mint julep drink was served at the Kentucky Derby, and has become synonymous with the event ever since. Our opinion is, it tastes much better in a true mint julep cup!

These cups are seen as a symbol of achievement, esteem and prestige, the historical Mint Julep cup has been used for hundreds of years to commemorate all of life’s celebratory moments. 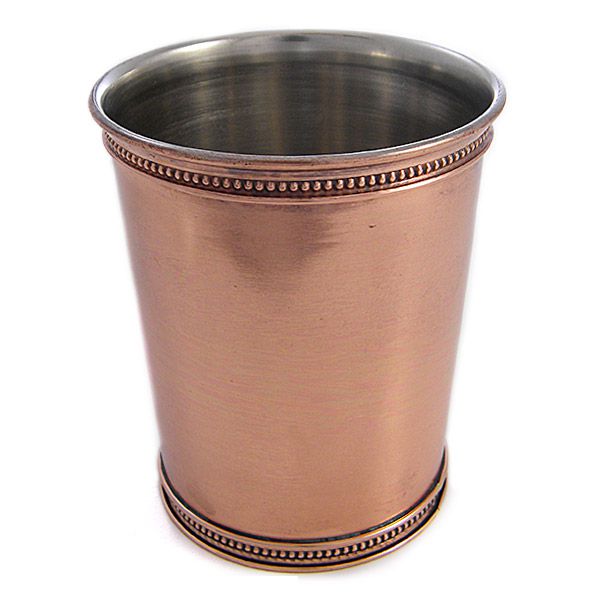 A Moscow Mule is a cocktail made with vodka, ginger beer and lime and poured over ice in a copper mug. The drink was created in the 1940’s when three gentlemen, John A Morgan, John G Martin and Rudolph Kunett met in the Chatham Bar and poured the concoction together over ice in a copper mug. Today, we call those copper vessels Moscow Mule mugs. Try your favorite ginger beer recipe in these classic mugs.

We currently offer a variety of Moscow Mule mugs. Each mug is crafted from solid copper and features a cast brass handle. Most of the mugs also feature a nickel lined interior.

Custom engraving is available, and looks amazing, on these mugs.

These copper cups are in the shape of the classic party “red cup” shape. Stackable, reusable and durable, they are a great alternative for the seasoned drinker.

Play a lot of beer pong? Have your own beer pong table? Upgrade your game by use these cups instead of solo cups! 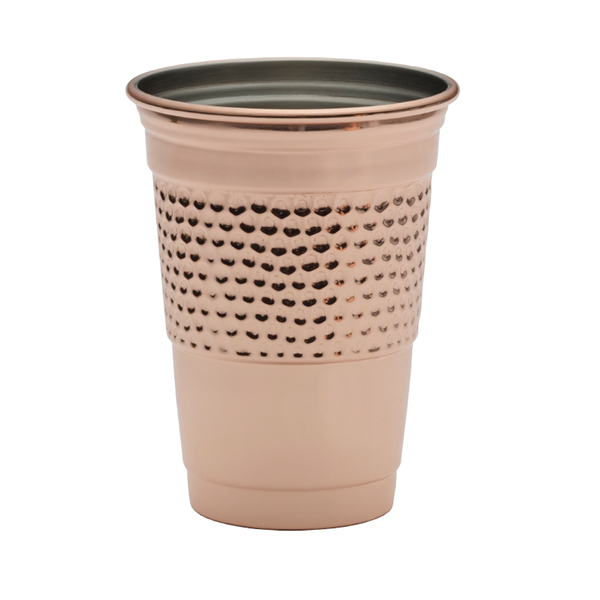 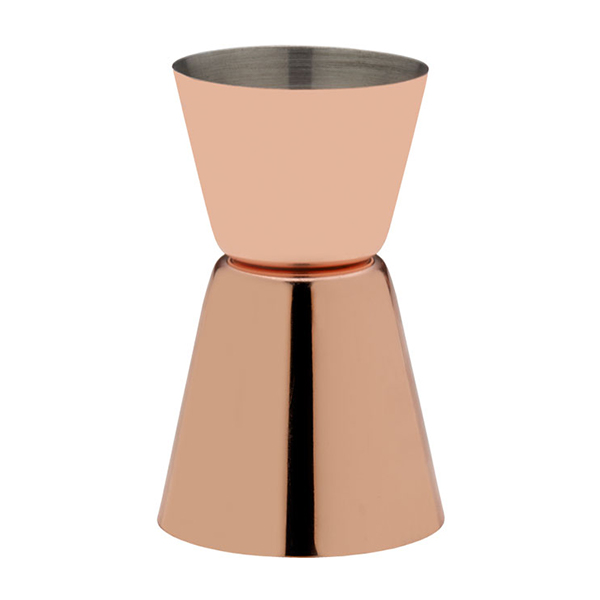 This Towle Living Copper Plated Double Jigger is ideal for mixing cool, refreshing cocktails. The exterior is copper-plated, while the interior is constructed of food-safe 18/10 stainless steel. Makes for a great gift or the perfect accessory for your home bar. Hand-wash with gentle detergent and soft cloth; dry right away. Do not soak. Double jigger has both a 20 ml and 40 ml capacity.

The term “Julep” is generally defined as a sweet drink, particularly one used as a vehicle for medicine.  A Mint Julep is traditionally made with four ingredients: mint leaf, bourbon, sugar and water. Traditionally, spearmint is the mint of choice used in southern states. This mint and sugar combo is very similar to a mojito.

The Mint Julep Cup is very popular throughout the South, and has long been a symbol of achievement, esteem, and prestige. For over 200 years

Americans have used their Julep cups at events like christenings, weddings, fairs and of course, the races.  Traditionally, Mint Juleps cups are made in sterling silver, silverplate, or pewter. These cups are held only by the bottom and top edges of the cup, as this allows frost to form on the outside of the cup.

Many of the southern states have their own unique and distinctive cup styles, including Classic, Beaded, and Threaded. Best known is the Classic style from Kentucky; the Classic American beaker was remade into a Julep Cup with a straight body lines and graceful moldings at the base and rim. This Kentucky Mint Julep Cup originates from early American Silversmiths and craftsmen Asa Blanchard of Lexington and William and Archibald Cooper of Louisville.  Nowadays, these  styles are manufactured by the world’s most prestigious silversmiths like Godinger, Empire, and Reed & Barton.

Here are a few links to recipes for different Mint Juleps.  As we approach the Kentucky Derby this year, perhaps you might want to join in the tradition and enjoy a frosty Mint Julep!

Silver Superstore is a local retailer located in Kent, Washington. Since 1998, we’ve been the online leader in flatware and silver home accessories, featuring many pieces that can’t be found anywhere else. Biggest selection, guaranteed lowest price, and the friendliest, most knowledgeable staff in the industry. All of our staff are employed and resided in the United States. With a lot of products being produced out of country it hard to buy locally anymore. Luckily Silver Superstore offers some great U.S. patterns created by U.S. based manufactures. Two of Silver Superstore’s largest U.S. manufacturers are Liberty Tabletop and Empire Silver Company. Just look for the “Made in America” logo on a product page to make sure your buying local!